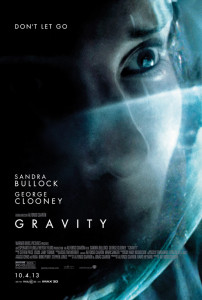 Gravity, though not a perfect film, is well worth watching, as Sandra Bullock ably carries this film on her shoulders as an astronaut/scientist on a space mission that quickly turns disastrous.

While on a spacewalk, Bullock’s character, Dr. Ryan Stone, learns that a missile has destroyed a Russian satellite, setting off a chain reaction of space debris that destroys even more satellites as pieces hurtle through space at the speed of bullets.

I won’t give away plot details, except to say that in most of the movie Bullock is the only character you’ll see, and it may occur to you, as it did to me, that this is kind of like the movie Castaway except it’s set in outer space.

And so it raises similar issues of fear, loneliness, hopelessness, hopefulness, courage, and ingenuity, while touching on faith only slightly more than its more earth-bound counterpart (which ignored it altogether, to its detriment).

The dizzying filmmaking is wondrous to see, with epic renderings of the terrifying vastness of space, as well as some incredible scenes revealing the complexity of objects large and small being flung about in a weightless, frictionless environment, making this is one of the few movies I’d recommend seeing in 3D  and in IMAX, if available.

To nitpick, there’s some insipid dialogue early on in the movie, courtesy of Ed Harris as the Voice of Mission Control, and there is so much implausibility that it taxed my ability to suspend disbelief a little too much, wondering just how much bad luck, then good luck, then bad, then good, one person can have in one day.

Ultimately I’m not sure I cared about Dr. Stone’s thinly-drawn character all that much, but this is an action/thriller more than introspective drama, and Bullock delivers a heck of a performance in this finely crafted nail-biter of a film that is definitely worth seeing.